Since this was a long trip I decided to break it up,  however, I have decided to finish with this final post. It will be longer but hopefully you will bare with me and enjoy the journey and hopefully my memories of the trip are still crisp….as they are slowly fading….

From Kasane we flew to Cape Town, SA 🇿🇦 Home for 3 days was  The Vineyard Hotel, http://www.vineyard.co.za. A hidden gem, luxurious hotel  that is on the eastern slopes of Table Mountain.  The towels are super fluffy and there is a nespresso machine in the room.  Our first day in Cape Town it rained and was quite cool, unexpected weather for December.  Our guide decided to take us about an hour out of Cape Town to Stellenbosch – wine country, a very quaint city, with most of the shops closed since it was New Years Eve.  The weather there was indeed sunnier and warmer.  We went to 2 wineries – Graff winery and Neethlingshof winery.  We did some wine tasting and explored the wineries before heading to lunch at Stellenbosch Kitchen. The food was really good with large portions.  We headed back to Cape Town to get ready for a night out.  We were supposed to go to the harbour to see fire works, hear the bands and ring in the new year.  I ended up staying in our room, as it was my turn to get sick… not fun.  Apparently I didn’t miss too much as it started to rain very hard and the group came back to the hotel early.

The next day we headed to see Cape of Good hope, table Mountain and the Penguins at Boulder Beach.   We did not go to Table Top Mountain as the line up on New Year’s Day was way too long, but we went across from it and got a view of table top from where we were.  The Cape of Good Hope was our next stop,  again line up to get into the park was long, luckily our wait was around 30 min.  After parking the bus, we hiked up to the lighthouse to get a better view of Cape point.  This is where the Indian and Atlantic Oceans meet.  It was a sunny day but very windy and chilly out.  We next headed to see the Penguins in Simon’s Town.  After a short walk we arrived to see the penguins, they are so cute, and so many of them.  So incredible to see them in their natural habitat. 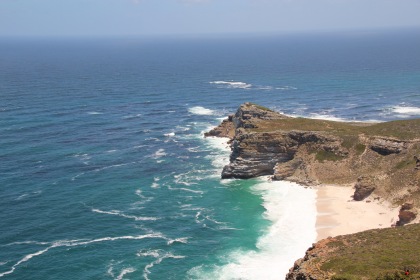 We boarded a plane the next day – Day 9 – to Nelspruit, then into vans for our  2 hour journey to Idube Lodge in Sabi Sands, which is part of Kruger Park, http://www.idube.com.  We all had our own cabins, which was different from our other places and someone walked us to our rooms when we were ready for bed. We could not leave our rooms once we were there, made sense as animals were free to roam in and out of the reserve, there was a large fence to keep elephants out but that was it.  We had two rides a day, the first at 5:30 am and the 2nd one at 4:30 pm, each ride being about 4 hours.  Our ranger was Matthew and our tracker was Mark.  We saw so many animals on our ride, elephants, lions, lioness, kudu, impalas, leopards, rhino.  It was amazing how our tracker would just jump off the safari truck and go into the bush to find an animal.  Matthew helped me set my camera so I would get great shots both in the day and night in manual mode.  I was amazed at some of the shots I got, especially the night ones.  Getting up at 5 am was tough at first but after the first day, I didn’t mind it as it was exciting when we  left our camp, unsure what we would see that morning.  One morning we saw two elephant males, fighting.  It was quite the site.  Two magnificent animals battling each other.  One our afternoons a few of us went on a “nature walk” in other words we walked in the bush with 2 rangers.  This was exciting but also a bit scary, one ranger was at the front with a gun, we had to walk in a single file, not talk and only do hand signals.  As we were walking my thought was what if we come across something the guns will not take this animal down.  Adrenaline was pumping because I was frightened, not going to pretend I wasn’t.  We heard some noises in the distance as we were walking toward the pond.  There was a hippo, just us on the shore and hippo in the water.  After a few minutes we started the walk back, the rest of the walk was uneventful, but that was ok with me.  The walk in total was about an hour.  After one of our night rides we had an outdoor dinner in a secluded part, not far from the lodge.  It was so beautiful, candles lit all around, we needed a ranger to take us to the washroom or for a drink at the bar, just in case there was an animal lurking, and there was a leopard in one of the bathrooms 😳  at one point during dinner.   This by far was my favourite place, there were lots of animals to see, the lodge was amazing as were the rangers, so knowledgable.   After a few days we had to leave for our last spot, Nkomazi Game Reserve, which was a 2 hour car ride from Idube. 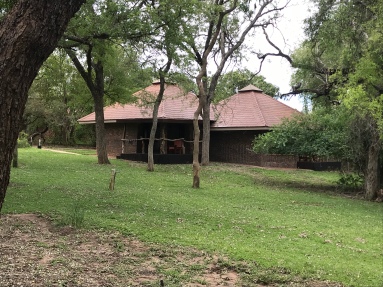 our home for 3 days 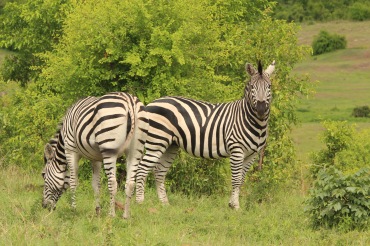 Nkomazi Game Reserve is a tented camp, at the end of greater Kruger, there are 10 tents and we took up 9, https://www.sa-venues.com/game-reserves/mpl_nkomazi.htm.  This is definitely a 5 star place. The safari rides were the same 2 a day for 3 hours.  The only difference was that instead of lunch, we had high tea.  The tents were by far amazing, each had its one little pool to cool off, an outdoor bathtub and shower.  Our tent was at the end, so we were near the river, I could hear the hippos makes noises in the morning, there was a fence so the hippos could not come up.  We saw brown hyenas, lions, giraffes, zebras, warthogs, rhino.  We did another hike and stalked 3 adult rhinos and a baby….again a bit scary but exhilarating at the same time.   We got within 30 metres before the rhinos picked up our scent and left the area, we were quite low to the ground.  We had to keep our tents zipped up so that monkeys or baboons didn’t get into our room.   Being in a tented room was extremly cool, we kept the windows open all night I feel asleep listening to the frogs sings, the water rushing from the river below so relaxing.  The stars were so bright and so many in the night sky.  Such an incredible experience.  I wish I knew so much more about night photography so I could try and capture the stars, maybe another time.  A great place to end our Safari experience. 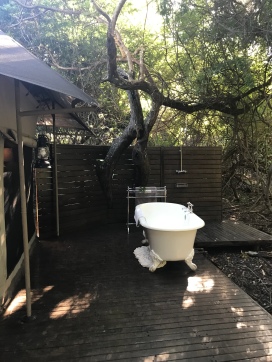 After 3 days it was time to pack up to come home, we drove 3 hours to get to Johannesburg to catch our flight to London.

A trip to South Africa which includes at least one Safari should be a bucket list must.  You will come back changed with a greater love and appreciation for our planet as well as for  Africa.  Leslie told us that when we leave Africa, part of us will be left there……well said.  🦓🦒🐆🐘🦏