Last month we took a Roman holiday – we landed in Rome, where we spent 3 days taking in the sights of the city.

We stayed at Hotel Barberini which is located between the Trevi Fountain , Via Venato and Piazza di Spagna. The hotel is in walking distance to everywhere you want to go and see. The rooms were nicely decorated, we had two twin beds to make a king, the bathroom looked newly renovated. There was a rooftop restaurant/bar which was very convenient and the food/service was great.

There was a cafe around the corner, which we frequented for our afternoon gelato. We toured the Vatican, the pantheon, walked around the coliseum (did not go inside this time). We usually ate dinner in one of the many restaurants in the Piazza Navona. The piazza has many fountains, cafe’s, restaurants and street vendors.

A visit to the Vatican and Vatican city was on our list and we took a guided tour. We had done this tour before but was great to do the tour again – we went into St. Peter’s Basilica.

We were in Italy for a wedding, after our brief time in Rome we met our kids at the airport and headed to Sorrento. We had arranged a driver in advance to take us from the airport in Rome to the villa we rented in Sorrento. We had one casualty at the airport – one bag didn’t make it to Rome – of course it had my son’s suits for the wedding that was in 5 days. After countless hours on the phone, a claim was put in and we hoped our bag would arrive to our destination on time. This however was not meant to be – we finally got our bag 1 1/5 weeks after we returned home.

After spending a few hours in the car, we arrived at our villa, Villa Daniela was our spot. It was such a beautiful place with fruit/vegetable gardens. We could pick anything we like – we had fresh plums, lemons, zucchini , egg plant – the grapes were still not ripe, same with the tomatoes. There was a swimming pool, and bbq area. We were about a 20 min cab ride into Sorrento, a bit farther than we expected. The only draw back was that we didn’t get to go to a cafe whenever we wanted or walk around as the roads were super winding and fairly dangerous for a pedestrian. Having our own place was really nice – we got some groceries to do a bit of our own cooking.

We visited Nerano beach, which is a small fishing village on the Amalfi Coast, at the which is situated at the point of the Sorrento peninsula. Most visitors go to Marina del Cantone, a seaside hamlet that is situated is at the bottom of a steep harbour. Brightly coloured umbrellas line the pebble beach, where you will also find restaurants. We got chairs and umbrellas at Mary’s beach. We stayed for a few hours and then went for lunch at a lovely outdoor patio, Bar Titonno.

One of the highlights was that we rented a boat, a 32 foot i believe to take in the sights from the water, we started from Marina della Lobra. The sea was a bit rough the day we went, but not terrible. The only thing we couldn’t do was go into the blue grotto as it was closed because of the rough waters. We stopped at the Marina Piccola where we got off the boat for an hour to walk around and see the sights of the southern part of the island. We ended up going for lunch at Mary’s beach in Nerano at a different restaurant, which was great- we stopped for a swim in the ocean in a little alcove, very refreshing as it was a very hot day, there was a small boat going to all the other boats selling ice cream cones and refreshment, and then we started our journey back to the marina.

The wedding was amazing, the ceremony was held outdoors – it was extremely hot at it was at noon.  After the ceremony we went for lunch, to cool off in the AC and kill time before the reception at 5pm.  They had a shuttle bus that left the centre of Sorrento to the venue – Hotel Antiche Mura.  The venue was perfect with such awesome view, especially as the sun set.  With Mt. Vesuvis as a backdrop how can you not have a great time. We partied the night away.  It was such an amazing night for all of us. 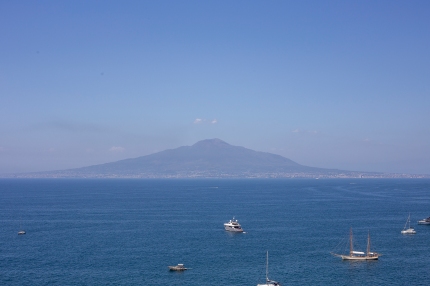 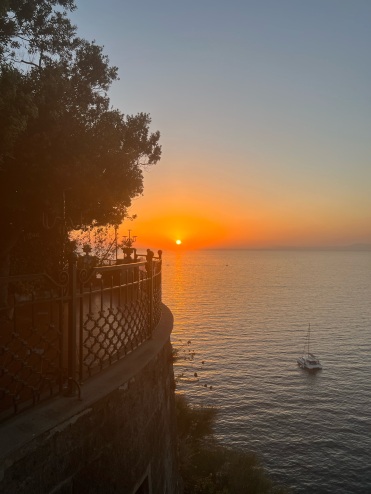 The last day we walked around Sorrento, a couple of us went to Capri to see the island, coming together at the villa to have some local pizza delivered and start packing for our journey back home.  We had a car picking us up very early to make the journey back to Rome to catch our flight back.

Have you been able to take a holiday this year?  Are you starting to plan trips abroad again?  Would love to hear from you and if you have any travel plans.