Getting there–   After a 15+ hour (closer to 18 hours) direct flight to Hong Kong we finally arrived.   Mistakenly,  we booked a hotel in Macau our first night and then 2 nights in Hong Kong.  Even after our research we didn’t quite realize that we could have booked 3 nights in Hong Kong and then just took the ferry across for an afternoon/evening, we couldn’t cancel our hotel because it was one of those pre-paid no cancellation deals (which I usually stay away from, but our friends booked the rooms).  After landing and getting our luggage , we took a taxi to the bus stop, then the bus took us to the terminal, where we went through customs and then another taxi to the hotel…. man that was a lot of work to get to Macau from Hong Kong airport  with our luggage.

Macau has been nicknamed  Las Vegas of Asia ….. a Portugese territory until 1999.   Portugese and chinese are spoken.  Everyone speaks English, we had no issues navigating around Macau – most signs are in English as well.

We checked into our hotel, showered and headed out to explore before we had dinner. We took a ride on the Sky Cab just outside of the Wynn hotel, just for a view of the city. It wasn’t long, a few minutes, but the lights were spectacular and the water show was great as well.  We were quite tired , the time difference was 12 hours ahead for us, so we had dinner at the hotel restaurant and then bed.  It was weird going to sleep when I was wide awake,  something were had to force ourselves to do in the first few days. 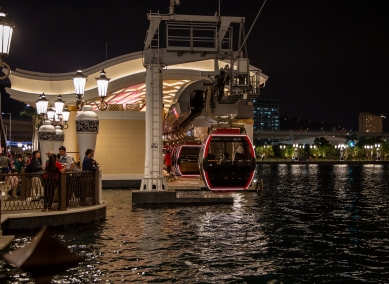 Sky cab – at the Wynn hotel

view from the Sky Cab

view from our room

Day 2 –    After a good night sleeps were explored the old city before making our way to our hotel in Hong Kong.  The city square is small, but so many stores , oh and did I mention Star Bucks everywhere.  One of the first things I noticed was how many people hang their laundry outside their apartment windows ( I can’t believe I didn’t have a photo) – there is a bar hanging specifically for hangers.  Crazy that nothing blows away. 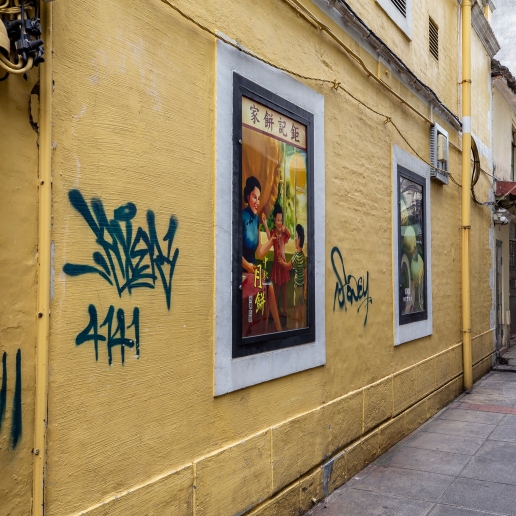 After walking around for the morning (until check out ) we headed to the ferry dock to catch our turbo jet ferry back to Hong Kong.  This was a much easier route to take, and faster about an hour and then a taxi ride to our hotel.  Once we checked in we booked a couple of tours before exploring on our own.  We booked a city/harbour  tour and the Lantau – Big Buddha tour for the next day.  Our evening tour started at Victoria harbour on a Junket boat – was hoping to get the red sails – but sadly we got the white with purple – apparently you are guaranteed a red sail junket boat.  We had a sunset cruise in the harbour, we got off the boat on the other side and made our way to Peak Tower.  There we we waited in line for 1 1/2 hours to get up by cable car – this was the wait time with a tour guide – without a tour guide don’t think we would have even attempted to get up there.  Crazy line up, and it was a holiday weekend that we didn’t know about.   The view of the city/harbour were spectacular – I was not allowed to set up my tripod to get a photo ( maybe if I had a monopod instead)  – but I did discover a feature on my DSLR (hand held night shots) figured I’d give this a try, it takes 4 photos and makes them into one.  We made our way back down by cable car and then took the subway from Central Station – 2 stops –  back to get back to our hotel, we could have gone 3 but we didn’t figure that out until it was too late – we paid $11.00 HKD each for the 2 stop subway ride. We were super proud that we figured out the subway system, as we had trouble finding the station but once we figured out the symbol for subway, much easier lol … We did hear a lot about the Octopus card and in hind sight should have purchased one, would have been much easier for certain purchases. 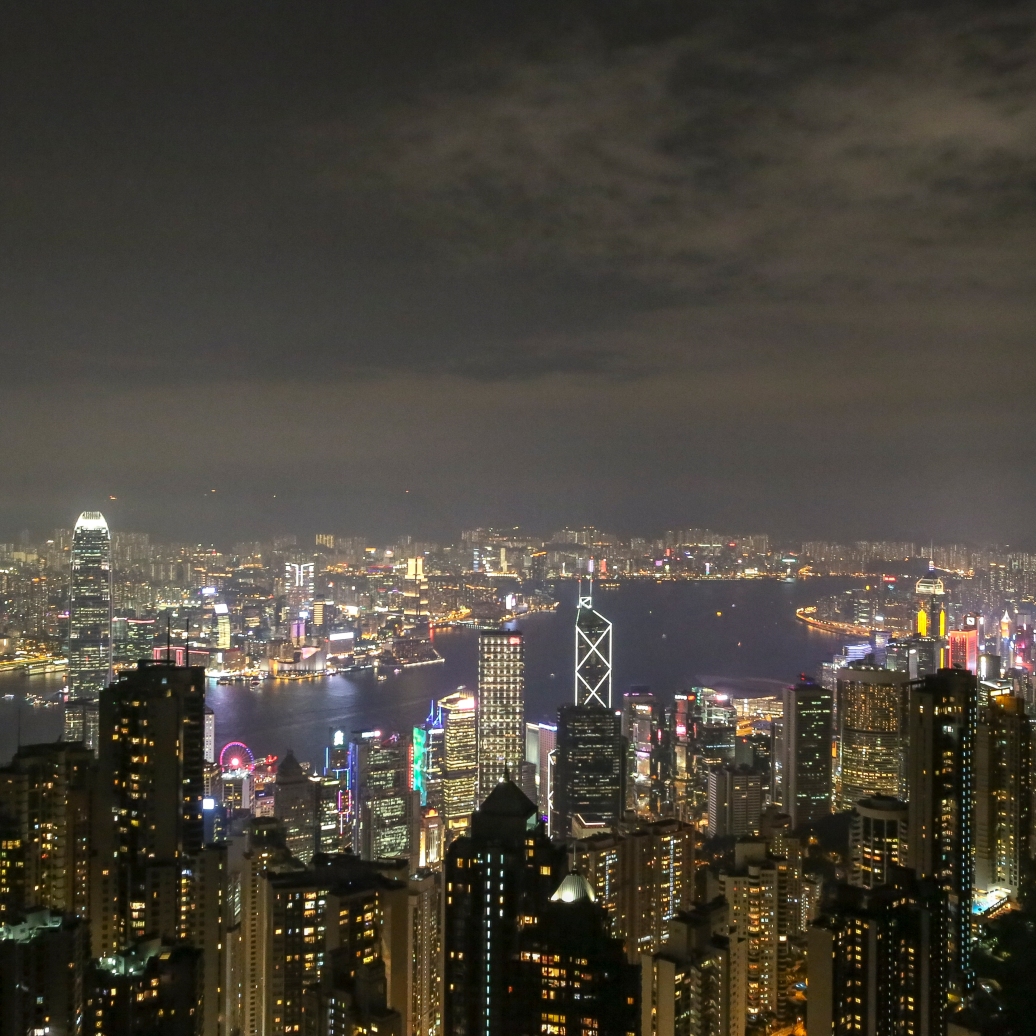 a view of Victoria harbour from the Peak 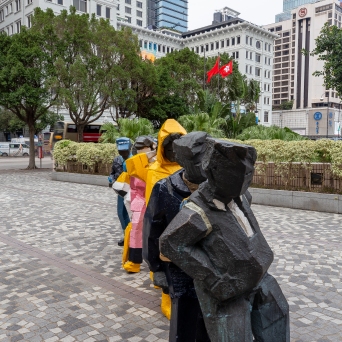 outside the art museum 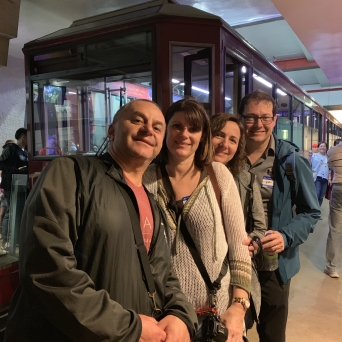 waiting for our cable car to go to the Peak

Day 3 – We had to get up early to join our tour to Lantau island.  We started at the city clock tower, which was built in 1915.  Afterwards  went to  Tung Chun to ride the Ngong Ping 360 cable car,  visit the Largest outdoor seated Buddha statue in Hong Kong,  and we had  a vegetarian lunch at the famous Po Lin Monastery.  The ride on the cable car was about 25 minutes, the views were spectacular, we did see a walking/hiking path below.  We saw the big buddha in the distance. After having some time to walk around, we went into the temples.  After lunch we went to the top of the Big Buddha and toured inside – no photos were allowed inside.  the views again were breathtaking.  We then made our way to the fishing village of Tai O, where the houses are built on stilts.  We didn’t get a ride on the boat as there was a holiday on the day we were there.  After walking around the market area and village we got back on the bus and headed back to our hotel.  When we got back we saw the light show in Victoria Harbour – i set up my tripod and took photos.  We had drinks at the Intercontinental Hotel, with a stunning view of the harbour, we enjoyed our last night in Hong Kong. 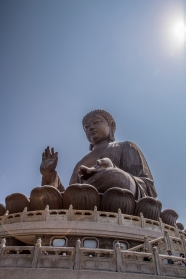 We had an afternoon flight to Shanghai the next day.  We were meeting our group from Canada for our 10 day tour of main land China.  As one adventure was ending , another was just about to begin.  My only regret is that we didn’t have enough time in Hong Kong to see everything we wanted  – I was not able to see Stanley market, temple street night market …maybe another visit is on my horizon.

Have you visited Hong Kong?  What was your favourite part of the city to visit ?